I’ve had this quinoa tabbouleh salad recipe sitting on my computer for ages, waiting to be shared since it’s a family favorite hit! You can check out my pasta caprese salad for another family favorite, or scroll down for the recipe. Disclosure: this post contains affiliate links.

With two picky kids in the house, it can be hard to come up with things that actually have nutrition that they like. I was surprised to see how much my boys like this quinoa tabbouleh salad recipe – I literally can’t eat it without them attacking me for spoonfuls! It’s also been a hit with guests.

Tabbouleh is a dish that is typically made with bulgur, or even couscous. When my sister (who has Celiac) was coming for Shabbos, I wanted an easy cold dish that she can eat so I decided to try a quinoa tabbouleh. I googled a few recipes, mashed them up, and after making it a dozen times, I settled on the exact quinoa tabbouleh salad recipe below.

Tabbouleh is typically made of mostly parsley and mint, with some bulgur and veggies thrown in. To satisfy my Ashkenazi palette, I made a version that is mostly quinoa, heavily dressed, with plenty of parsley, and sweet grape tomatoes. Even my husband eats it (and he’s not into lemony, herby dishes!) 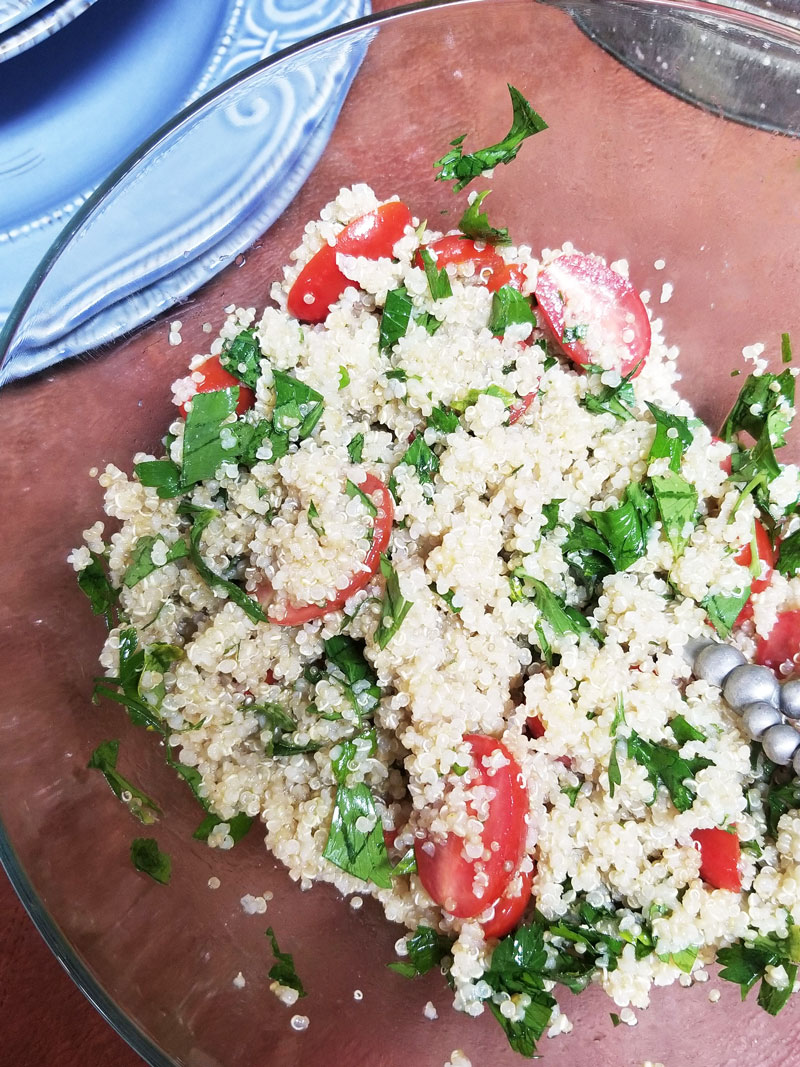 Another thing that bothered me about tabboulehs that I’ve tried before at restaurants was that sometimes it’s made basically as an Israeli salad with a bit of Bulgur tossed in. I wanted mine to be really heavy on the parsley – so that you get a good crunch, with plenty of quinoa for protein.

Anyway, I have to be honest: I photographed this quinoa tabbouleh salad recipe before I finished refining the recipe – the way I make it has more parsley than pictured. You’ll anyway probably want to adapt. When I made it for my parents for Sukkot, I put in less parsley proportionately 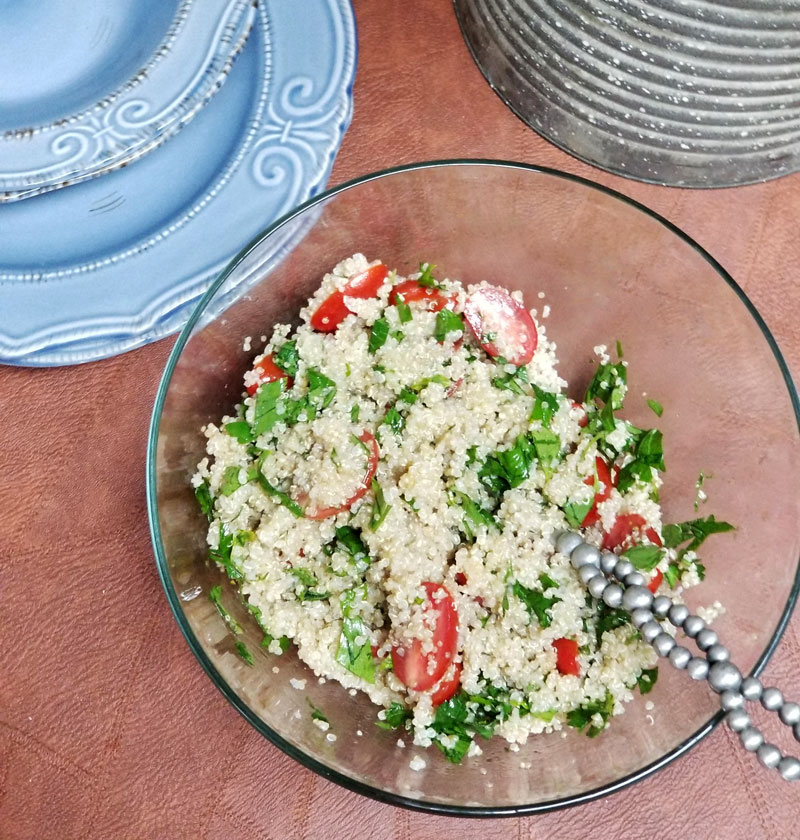 Also, oddly enough, I found that my proportions came out best when I made 1.5 cups of quinoa. So I know that’s a bit odd – and keep in mind that it’s not a scientific recipe that you can’t modify to your needs. I am not  a foodie – I am a creative who likes to streamline food and I do sometimes get creative with my food.

Originally, when I made this quinoa tabbouleh salad recipe I put in cucumbers. Then, I started making it to sit in my fridge and be available for lunches. I found that the cucumbers spoiled too quickly. Then I discovered that my family likes it better without cucumbers anyway.

I use grape tomatoes because they’re sweeter and less seedy than typical cutting tomatoes, and they are absolutely delicious in a tabbouleh. 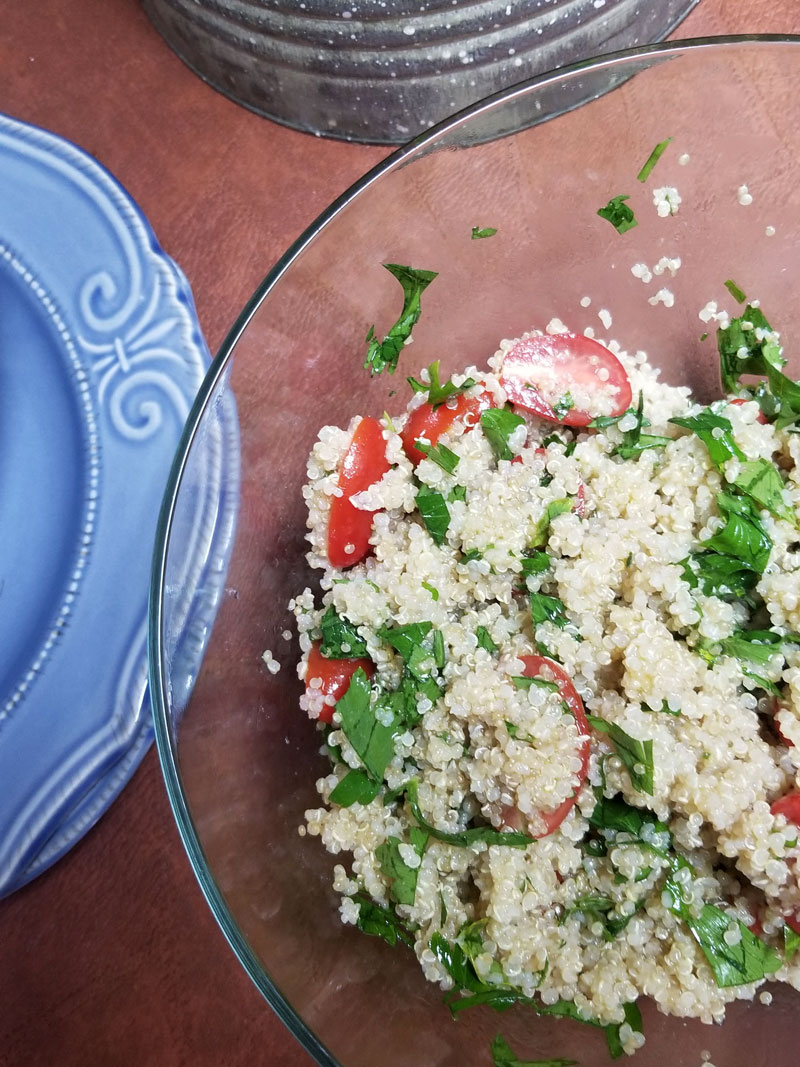 I also use only parsley – no mint, scallions, or whatever you might find in other recipes. The reason is: like I mentioned, I’m not a foodie – I’m a shortcut cook. And so I don’t use enough fresh herbs to buy a few different types. If I have leftover parsley, I’ll toss it into a soup or something, but I’m not going to use parsley and mint and scallion.

So I’m sharing a very whittled down, realistic quinoa tabbouleh salad recipe that I hope you’ll also enjoy making. If you’d like to add more of the traditional ingredients, play around with it, figure out what works for you and your family!

I used to cut my parsley by removing the leaves and slicing them on a cutting board. I recently discovered these herb scissors and they are a lifesaver – and so much fun to use! Since I make this salad every week, it’s worth having a time-saver around for it. 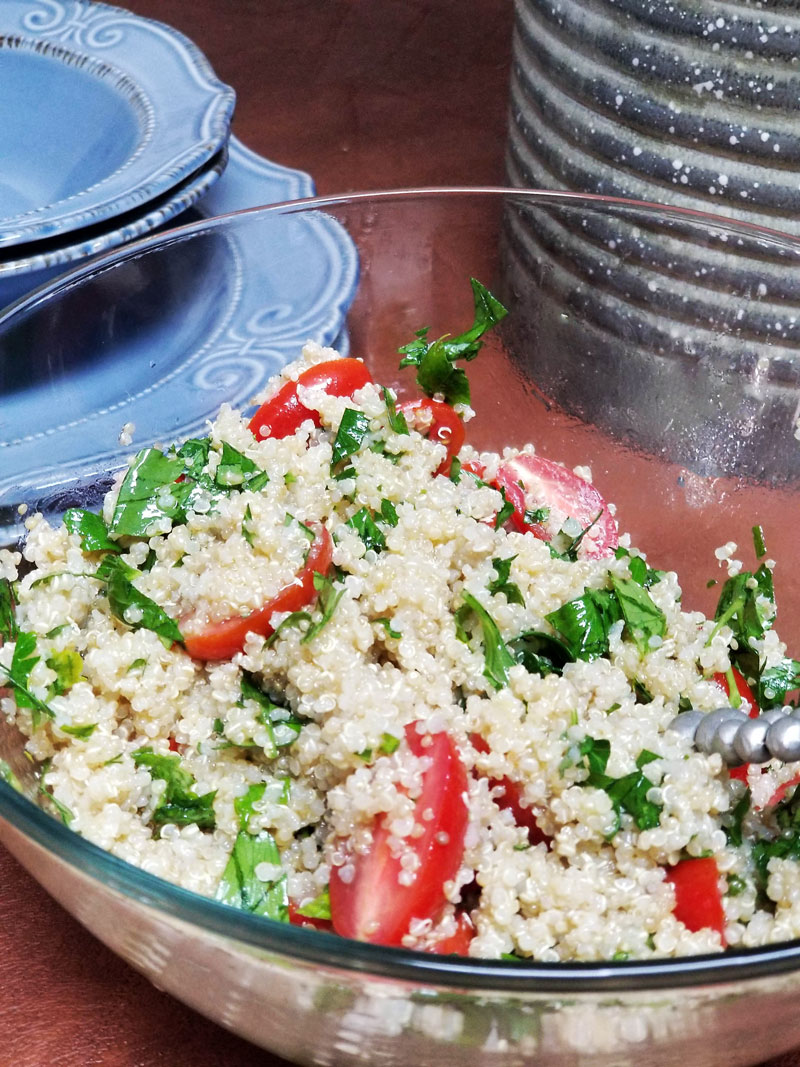 What you need to make this quinoa tabbouleh salad recipe:

How to make this quinoa tabbouleh salad recipe:

I hope this quinoa tabbouleh salad recipe becomes a new favorite of yours too! 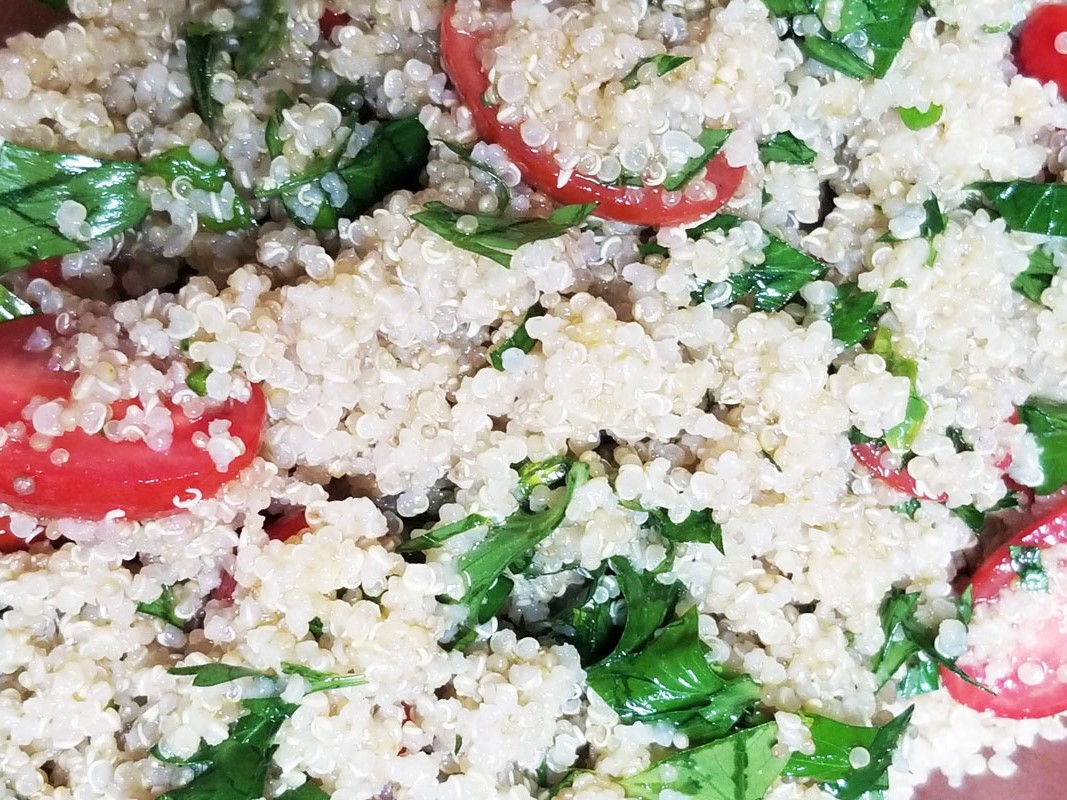 Print Recipe
Quinoa Tabbouleh Salad Recipe
A streamlined family friendly dish, whittled down to make it easier! This simple version of quinoa tabbouleh is easier to make and more kid-friendly. 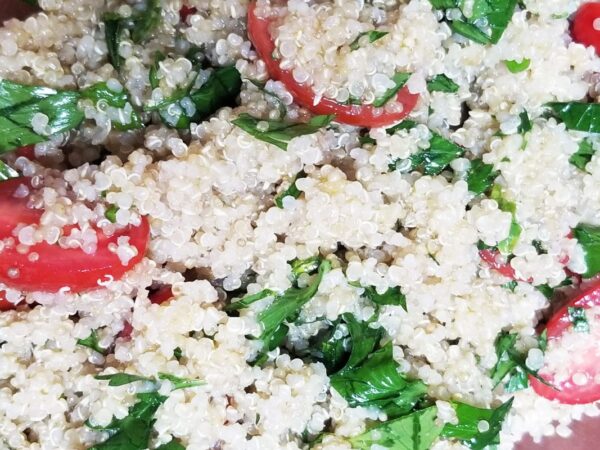