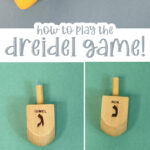 Ready to learn how to play dreidel in honor of Hanukkah? This dreidel rules printable is so cute and comes with a cute poem with the words. When you’re done, learn how to make a dreidel out of clay! This post contains affiliate links.

Chanukah is fast approaching, and it’s time to pull out those dreidels!

Ready to learn all about the game? I decided that instead of just sharing the basic rules along with the dreidel rules printable coloring page/poster, I’ll give you further history and background.

For those of you who don’t need this, feel free to skip around:

What is a dreidel?

A dreidel is a spinning top with four sides, each one with a different Hebrew letter – more on that below. This is not just a toy. There is a whole game around it! It’s actually quite a fun family game, that’s super compact and affordable. We’ve got a whole box of dreidels of different types in our home – and those are just the ones that have survived Hanukkahs past.

The Meaning Behind Dreidel

So why do we play dreidel on Hanukkah? The meaning behind dreidel lies in resilience, sticking to tradition, and retaining one’s identity.

To obliterate any remnant of Jewish ethnicity and essentially force Jews to absorb and assimilate completely into Syrian-Greek society, there were rules. The rules were directly targeting things that maintain Jewish identity.

One of those rules forbade Torah study. However, the Jewish people have been and always will be committed to maintaining our identity.

So, as the story goes, the brave children would hide out in caves, studying. When patrols came by, they quickly hid their scrolls and pulled out spinning tops.

They’d play with the tops, claiming to have been doing that all along. Hanukkah is about a present and future where Jews can exist proudly. Our kids are our future, which makes the meaning behind the tradition of dreidel so important. So much about Hanukkah is about the kids.

The Letters on the Dreidel

So what are the letters on the current dreidel that is traditionally used on Hanukkah?

They are Hebrew letters, an acronym for the sentence that states “A Great Miracle Happened There”. They are as follows:

In Hebrew, an adjective follows a noun, which is why the order is like that.

However, what about in Israel, which is where this story took place (during the era of the second temple)?

How to Play Dreidel + A Dreidel Rules Printable

Ready to play? Here is an outline of how to play dreidel. I also created a dreidel rules printable that can be colored or just left as-is.

The classic game is as follows:

You need at least two players. You can play with as many as you’d like – a whole classroom can play – it can just get boring to wait for one’s turn if you have too many players.

You can play with one dreidel or have each player choose one to play with.

Each person receives an equal pile of coins, and a “pot” is placed in the middle as well.

If you prefer, you can start by splitting the pot equally and having every player contribute 1-2 coins for the pot. (You can use nuts or anything physical to symbolize “points” – more ideas below).

Going around the circle, each person gets a chance to spin the dreidel. They take action depending on the letter they spin.

When you decide to finish the game, either everyone keeps what they have, or you can do a winner/runner-up/3rd place system.

Of course, there are all sorts of variations on the game – the main thing is to have fun!

I wanted to point out that I’ve heard some people a bit hesitant about it, as it almost feels like a gambling type game. A few pointers:

You can play for anything! While the most common is coins (a few rolls of pennies or quarters will do – depending on how generous you are) or nuts, some alternatives are:

The possibilities are truly endless!

Ready for the dreidel rules printable? I hope you enjoy this fun printable with a poem – it was truly a work of passion that I put my heart and soul into. My sister (author Fradl Adams) helped me tweak it and guided me.

The entire thing was “hand” lettered digitally on my Surface Pro using a Surface pen.

I left it black and white to make it hand-out-able in classrooms, and so that it can double as a Chanukah coloring page.

Download your free coloring page! It’ll arrive right in your inbox. By downloading, you’re subscribing to our FREE newsletter with updates on cool printables like this, ideas to simplify Jewish life, and more. Unsubscribe at any time at the bottom my emails. I respect your privacy and the law, and won’t share or sell your email address.

I hope you enjoy the dreidel rules printable as much as you enjoyed learning how to play dreidel! What does your family play for? Comment below!

Want some more fun ideas for dreidels? Try decorating wooden dreidels, or make a paper dreidel with a free template!